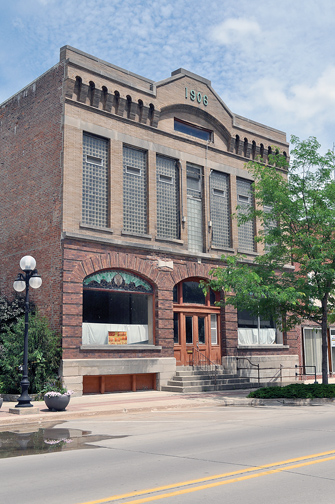 Local residents and visitors to Junquefest this weekend will have a chance to tour an historic building that a nonprofit organization hopes to turn into a venue for educational, social and cultural events.

Local Initiative for Transformation Webster City LLC or LIFT WC, plans to open the doors to the former Elks Club building at 713 Second St. The building will be open to the public Friday from 12 to 7 p.m., Saturday from 9 a.m. to 6 p.m. and Sunday, 9 a.m. to 3 p.m.

The nonprofit group purchased the 1906 building last month, and since April 19, have been working to clear out the structure.

“This is such a beautiful building. We thought Junquefest would be a great time to invite people in to see this historic place,” said Darcy Swon, secretary of the LIFT WC board of directors. Lindsay Henderson is president of the board, John Hawkins, Webster City’s mayor, is the vice president, Zach Chizek is treasurer, and Jake Pulis rounds out the five-person board.

As the board was cleaning out the building, they found many treasures, some of which will be offered for sale during the Junquefest event.

“We’ve got some items that we thought would sell well at Junquefest. What we’re asking people to do is to give us a good will donation,” Swon said. “It will all go to the nonprofit and back into the building.

The lower level is set up with tables, featuring glassware, lighting fixtures, architectural pieces, and other treasures.

Visitors stopping at the building will also have a chance to take a tour of the building, Henderson said. The original tin ceiling on the first floor is still intact as well as hardwood floors and sturdy carved bannister and stairs leading to the upper level ballroom.

“We’d really like to see the ballroom as a venue for local talent,” Swon said. Friday night, after Junquefest closes, LIFT WC will host a casual live music event beginning at 7 p.m. Local musicians Owen and Jae, Shannon Swon and others will be performing in the ballroom.

“If you stop down, be sure to bring a lawn chair, because we have limited seating right now,” Henderson added. There is no cost to attend, and Swon said she hoped people would look around and share ideas on the types of events that could be held there.

“We’ll likely maintain ownership of the building and manage the ballroom as an event space — rented for weddings, live music concerts, art shows — we certainly want the public to give us ideas about what they’d like to see happen,” Henderson said.

The main floor would offer two commercial spaces, she said.

“We’ll be looking for businesses that can bring social connections. Not so much a business space but maybe a book store, art gallery or food and dining. Something where people are invited to come in and stay a while,” Henderson said.

Junquefest will also serve as the official kickoff for the #LIFT the Elks fundraising campaign. Swon said the board is looking to raise $1.1 million to renovate and revitalize the building.

The project plans call for:

• installing a new west entrance with a ramp and exterior elevator for ADA accessibility;

• equipment and furnishings for the ballroom.

“Now we’re not looking to raise all of that from the public. We’re going to be as grant heavy as we can. But we can’t do it all without the charitable donations,” Swon said.

A block grant will help with facade and exterior updates. Those costs are not including in the $1.1 million cost estimate, Henderson said.

Charitable donations to LIFT WC can be made to the Enhance Hamilton County Foundation, 501 Bank St., Webster City. Be sure to put LIFT WC in the memo line of the check. Online donations with a debit or credit card can be made by going to enhancehamiltoncounty.org.