Bring on the junque

Junquefest returns to Webster City this weekend; more than 60 vendors to display their wares 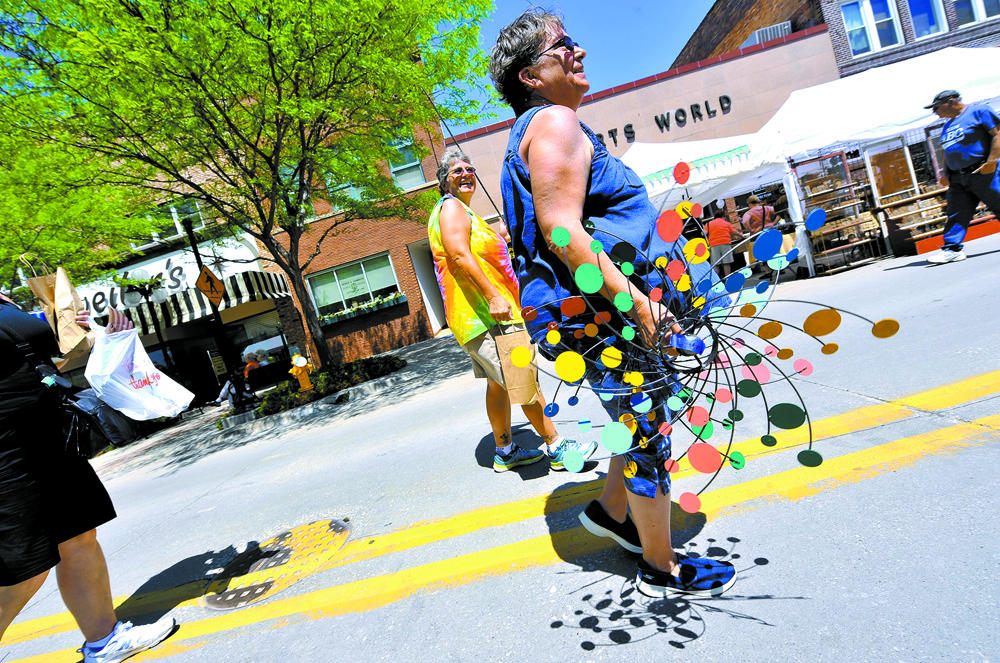 Downtown Webster City will be brimming with antiques, junk, salvage materials and other unique items as the sixth annual Junquefest returns to the community Friday, Saturday and Sunday.

The event, organized by the Webster City Area Chamber of Commerce and sponsored by Webster City Custom Meats, will open Friday from 12 to 7 p.m., Saturday from 9 a.m. to 6 p.m. and Sunday, 9 a.m. to 3 p.m.

Junquefest will be located along Second Street between Prospect and Seneca Streets. That section of Second Street will close at 2 p.m. Thursday as organizers and vendors begin to set up for the weekend. The side streets of Willson Avenue and Des Moines Street will be closed one block north and one block south of Second St. Parking will be available in the north alley lots and along First Street.

Jen Peterman, Chamber Executive Director, said there are about 63 vendors this year. Many of those sellers have reserved multiple booth spaces, she said, as 112 spots have been claimed.

“More than half of the vendors are new this year,” she said.

— Daily Freeman-Journal file photo Young participants in the Camp Creamery theatre workshop in 2018 rehearse a number for their production. Camp Creamery is returning to Webster City Community Theatre this summer from July 29 to Aug. 3. The children work with three professional actors for a week and finish the workshop with a full-scale musical production.

— Daily Freeman-Journal photos by Billie Shelton
April Ewing with some of the inventory in her shop, Urban Heirlooms, located at 633 Main St. in Jewell, one of six vintage shops in the 600 block.

— Daily Freeman-Journal photos by Billie Shelton
The Monkey Puzzle Mercantile, is operated by Hagen Watts and his family. The shop, at 632 Main St., Jewell, joins five other vintage shops on Main Street to make the town a popular destination for shoppers.

-Daily Freeman-Journal file photo by Hans Madsen
Andrew Peterson, of Webster City, puts a dining room table together Friday afternoon with some help from his brother, Timothy Peterson, of Burnside. Peterson is the owner of Creations of the Hearland. He crafts furniture and other objects from old wood.

An electronic bugle was donated to American Legion Post 191 by the family of Bob Schwiebert, a legion member for 60 years. Pictured are Commander Rich Stroner and legion member Bob Goretska. 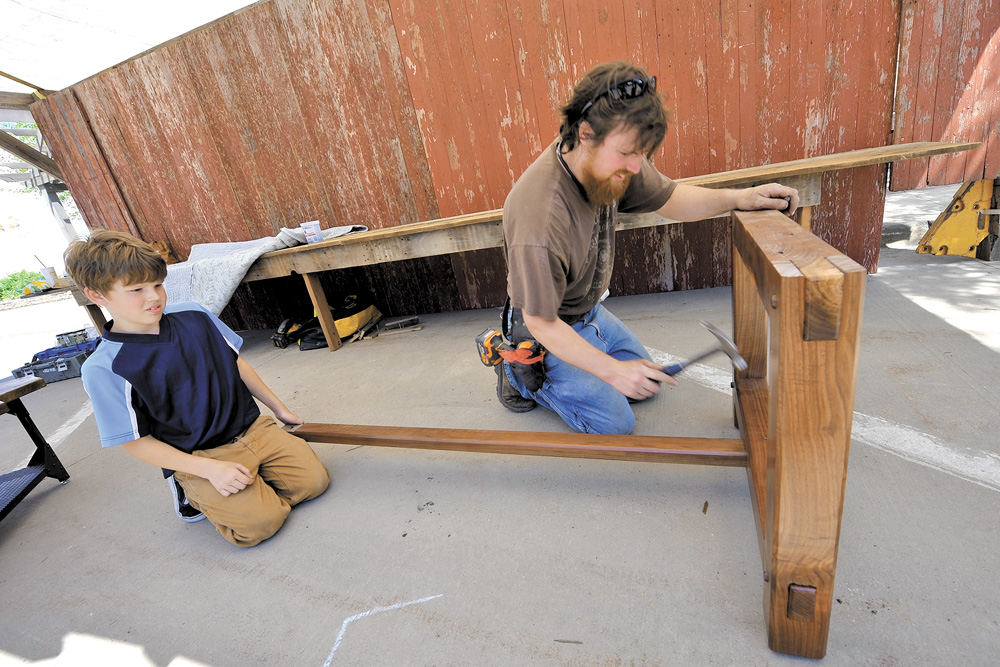 -Daily Freeman-Journal file photo by Hans Madsen
Andrew Peterson, of Webster City, puts a dining room table together Friday afternoon with some help from his brother, Timothy Peterson, of Burnside. Peterson is the owner of Creations of the Hearland. He crafts furniture and other objects from old wood.

“We’ve got nine food vendors that will be located along Des Moines St. next to the Daily Freeman-Journal,” Peterman said. “We’re going to have everything from Mexican food, to tenderloins to traditional fair food.”

She added that the Webster City Rotary Club and Van Diest Medical Center Foundation will operate a booth offering in pork burgers and Hy-Vee will be serving food during the event. Both of those local booths will be in the 700 block of Second Street. Additionally, the American Legion will hold pancake breakfasts both Saturday and Sunday mornings, Peterman said. She said Mornin’ Glory will operate their Fire and Ice wagon, featuring lemonade and kettlecorn.

The Farmers Market will open for the season on Saturday and will be located just north of Second Street, Peterman said.

Golf carts for event organizers and volunteers are being sponsored by KC Nielsen, Gerber Auto and North Central Chiropractic.

Peterman said the City of Webster City crews have been very helpful in making sure everything is ready for the vendors.

“We’ve met with them three or four times, and they have been just wonderful,” she said.

Peterman said there will also be plenty of entertainment over the three-day weekend. Randy Andrews will perform Friday night in the Availa Bank Plaza and Back Alley Jam, a blues band, will be play from 12 to 4 p.m. Saturday. Capping off the weekend will be the Mune Dawgs from 1 to 3 p.m. on Sunday.

“We could still use a few volunteers for Saturday and Sunday,” she said. “If people could give us an hour of their time, that would be great. There are a variety of jobs.”

As a way of gauging where people are from and some other information, Peterman said volunteers will be circulating through the crowds to conduct brief, five-question surveys.

“That’s new this year,” she said. “We want to track information about where people are traveling from, are they from far away or are they shopping local. We want to know how they heard about the event.”

Also this year, Peterman said shoppers will be invited to drop a kernel of corn in a bucket as a way for the Chamber to get a more accurate count of those attending.

“We don’t have a gated admission so it’s hard to keep track. But if they stop at the chamber booth and drop a kernel in, we might get a little bit closer to knowing the total attendance,” Peterman said.

Van Diest Medical personnel will man a first aid booth Saturday and Sunday, and 4-H group will be offering up bottled water for sale.

The former Elks Building will also be open during Junquefest. Volunteers with LIFT WC have been hard at work clearing the building of junk and debris, but have saved some of the choicest pieces to offer for sale to the public. The building will be open to the public Friday from 12 to 7 p.m., Saturday from 9 a.m. to 6 p.m. and Sunday, 9 a.m. to 3 p.m.