With two confirmed cases of measles in Iowa, the first since 2011, many Iowans are wondering ... 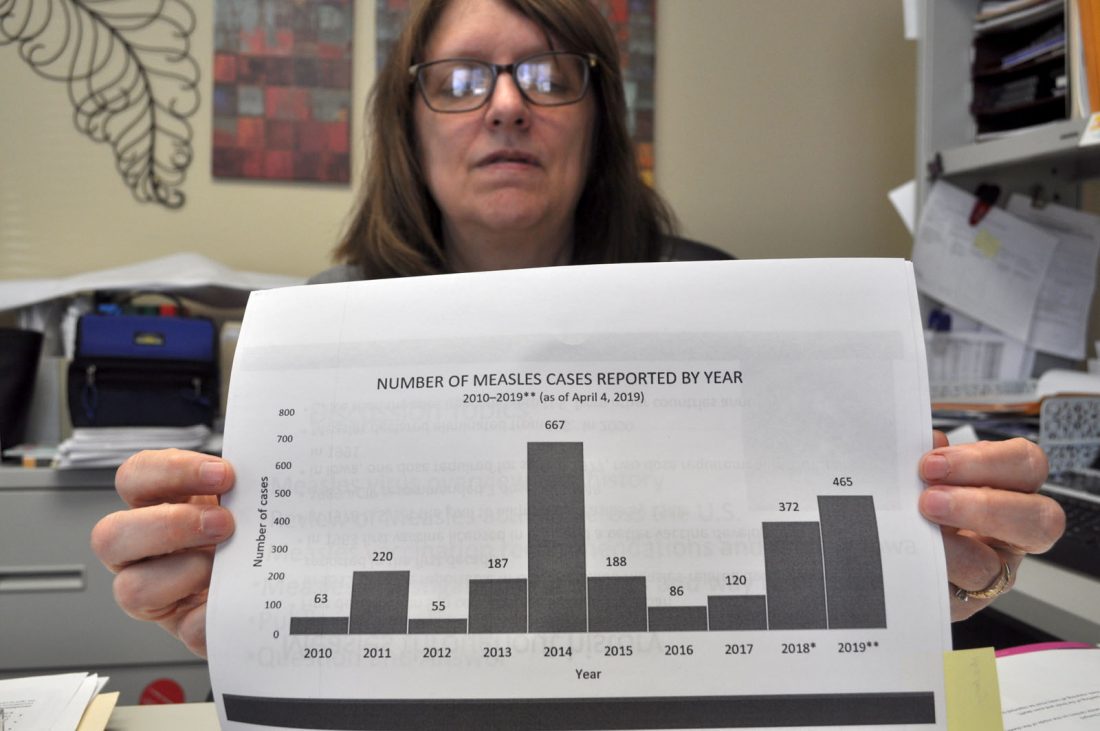 -Daily Freeman Journal photo by Joe Sutter Public Health Director Shelby Kroona shows how 2019 is on track to be a record year for measles cases in the U.S., with 465 cases reported as of April 4. That number keeps growing; it was 555 by April 19, including the latest case reported in Tennessee.

It used to kill 500 Americans every year, and send 48,000 people per year to the hospital, according to the Iowa Department of Public Health. You can get it just from walking into a room where an infected person has been two hours ago. And once you catch it, there’s no cure; all that can be done is to treat the symptoms and wait for the disease to run its course.

Fortunately, once the measles vaccine was introduced in 1963, cases dropped dramatically. But this year is on track to be a record-breaking year.

With two cases of measles confirmed in Iowa, for the first time since 2011, people have questions about measles and vaccinations, according to Shelby Kroona, Hamilton County Public Health director. Fortunately, most people won’t need to do anything.

“The measles vaccine is a two-shot series. One dose has been required to get into public school ever since 1977,” Kroona said. “Then in 1991 they went to two doses. But even with only one dose the vaccine is about 90 percent effective. So it’s one of the best methods of preventing a person from getting measles.

“That being said, we have a lot of adults who went to school before 1977 who are probably wondering–was I vaccinated? Did I have the measles?” 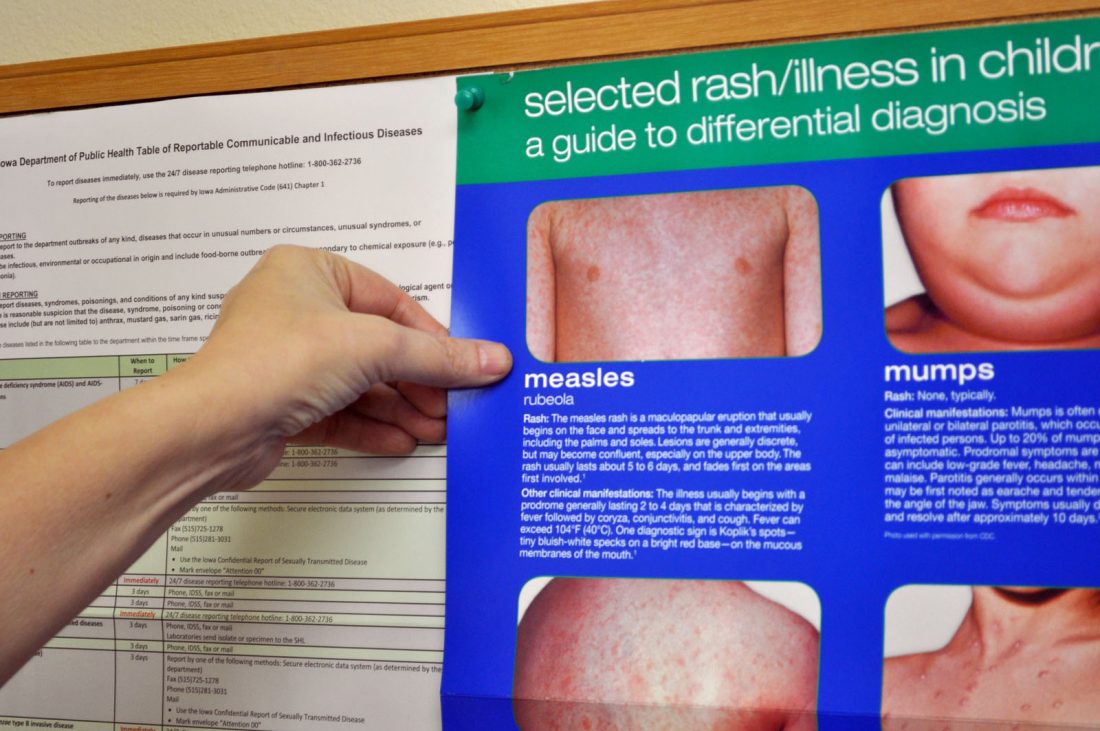 But if you’re in that gap between the two key years? It might be smart to check with your physician, and your medical records, to make sure you’ve had the shot, she said.

Measles vaccine typically comes in a shot along with mumps and rubella vaccines – called the MMR vaccine.

Iowa is not in an outbreak situation currently, Kroona said, so there’s no cause for alarm.

“People should find out their status, but there’s no need to rush out to the doctor and get the vaccine,” she said. 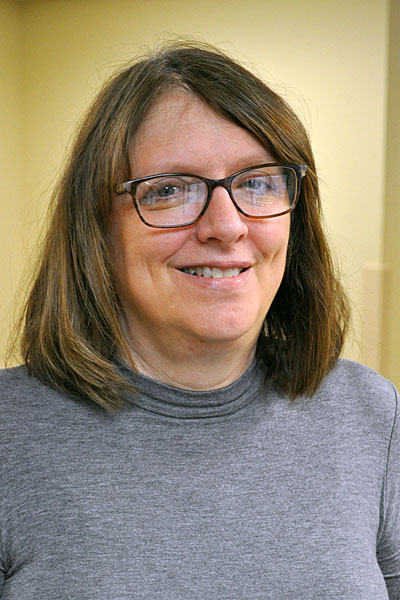 Both cases of measles in Iowa occurred in one household, the IDPH reported. Both were unvaccinated. The department says the first person contracted measles while on a trip to Israel, where outbreaks have been reported.

Since both people were isolated, there is no danger to the public, the department reported.

-Daily Freeman Journal photo by Joe Sutter Public Health Director Shelby Kroona shows how 2019 is on track to be a record year for measles cases in the U.S., with 465 cases reported as of April 4. That number keeps growing; it was 555 by April 19, including the latest case reported in Tennessee.

The message officials want to stress? Vaccines against measles are very safe, and very effective, she said.

“There are a lot of myths out there about the MMR shot, but those have been found to be not true,” she said. “Really the best way to protect anyone from getting measles is the vaccine.”

Usually the first dose is given at age 1, and the second when a child goes into kindergarten – but it can be given much later.

Anyone under age 18 without private insurance can receive a MMR vaccine for free at the public health department, 820 James St., thanks to Iowa’s Vaccines for Children program.

While the vaccine is extremely effective at preventing illness, those without the vaccination can get sick very easily if measles does come to an area.

“Measles is one of the most contagious diseases,” Kroona said. “Ninty percent of people exposed to measles will come down with it, if not vaccinated.

“The infectious period can start four days prior to the rash onset, and last until four days after the rash develops. Sometimes when people are exposed, there’s a 21-day incubation period.”

Measles is airborne – someone with the disease coughing or sneezing can put the disease in the air, and it can linger for up to two hours. It can also be passed along from touching a surface that someone else has touched.

The main sign of measles is a red rash, which can start as small red dots but spreads to cover more of the body, she said. It’s also marked by high fever, runny nose, and watery eyes.

Children under age 1 can’t be vaccinated, and neither can people who are immunocompromised – so it’s important for those who can to get the vaccination. More serious complications can include pneumonia, swelling of the brain, diarrhea, and even death.

The Associated Press reports 2019 is already on track to be a record-breaking year for number of measles cases in the U.S. There have been 555 cases reported so far this year, compared to 372 for the whole year last year.

While 20 states have reported cases, New York has been the epicenter, the AP reported. Nearly two-thirds of all cases have been in New York, and 85% of the latest week’s cases came from the state. Most of the New York cases have been unvaccinated people in Orthodox Jewish communities.

Measles is much more dangerous in countries where medical care is harder to get. In Madagascar, where one mother had to walk 15 miles just to find a doctor for her baby, a measles outbreak has killed more than 1,200 people. The vaccine is hard to get in that nation, where many people are desperately poor.