Former resident returns to Jewell and her childhood home 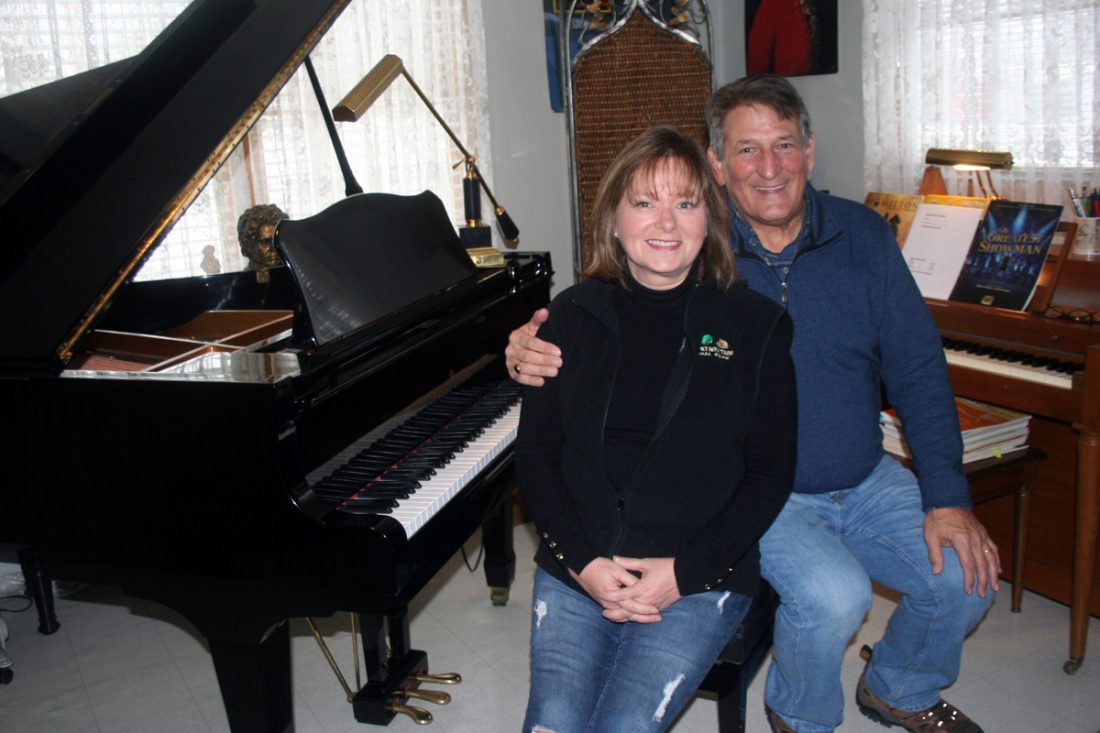 — Daily Freeman-Journal photo by Billie Shelton Don and Delayna Beattie sit in their home music studio, where they teach piano and vocal music

JEWELL — Delayna Beattie doesn’t believe that old saying that you can’t go home again. She and her husband Don moved back to Jewell, her hometown, almost three years ago. Not only back to Jewell, but they moved into the house on the north end of Jewell where Delayna grew up with her six siblings.

“I always knew I wanted to come to back to Iowa, but I didn’t think it would be Jewell,” she said with a chuckle. The Beatties lived in southern Illinois, 45 minutes from St. Louis and near Carbondale, where for 30 years Don was a professor of piano and director of piano pedagogy. Both he and Delayna also had independent piano studios, where at their peak they taught as many as a total of 60 students.

Even with busy schedules, the couple, now married for 23 years, came back to Jewell regularly to spend time with her parents. “I knew that someday we had to get to Iowa,” recalled Don, a Pennsylvania native who grew up in Washington, D.C.

So after Delayna’s parents passed away in 2014 and 2016 and the question came up of what to do with the Staples family home, it seemed natural for Delayna to tell the rest of the family that she and Don would buy it. Even though Don wasn’t exactly consulted about that decision, he understood. “We had spent lots of time here, so I was very comfortable here,” noted Don, who retired from the university in 2010. He and Delayna then became the full-time music ministers at their Illinois church and also led children’s choirs.

“I can’t imagine not teaching someone,” Don said, so soon after moving into their modest Jewell home the couple went to work setting up their piano studio there in a spacious, bright room. Beattie Music Studio attracted both voice and piano students, adults and children from the local area as well as Williams, Story City, and even St. Louis (weekly lessons are done via Skype). “I’m teaching kids of people I grew up with,” noted Delayna, who attended South Hamilton schools. They now have 18 students who in December presented their first recital.

You could say teaching music is a calling for the couple, who has traveled all over the world to teach and play the piano, to educate others about music. “What I want to do is give my students a place to go when they feel bad. If I can find a way to teach a student enough music, it’s a resource that makes it okay when life is a struggle. If you can get kids into music, I feel they find themselves by knowing how to relax their feelings,” Don said, adding that they have taught music everywhere. The couple is also very involved with the Beethoven Society.

His wife sees what they do in simpler terms. “We’re just helping to make better folks. I want it to be a tool to give them chances to get in front of people. Music gives them another way to contribute.”

At this station in life their enthusiasm for and devotion to teaching music, especially in Jewell, is still strong. “We couldn’t have lived here when we were younger,” Don stated. “It’s very clear that moving here has brought health benefits. I’m so happy to be in a peaceful place because most people don’t have that.”

“I never would have been able to predict this, moving back,” Delayna said about her hometown that — like many folks who end up back home after living elsewhere — she sees differently now.

“There’s lots of pride here. People care for each other.”