First of its kind program will benefit students 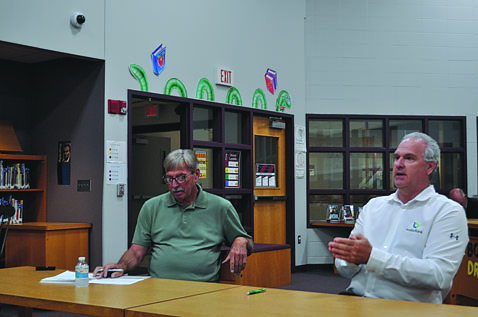 JEWELL – A new initiative was announced Wednesday that will emphasize the importance that financial literacy plays in one’s success and the value of learning these skills at an early age. The Financial Literacy Council of Greater Hamilton County unveiled the new program at the South Hamilton Elementary School. It is the first of it’s kind in the United States and will impact all Hamilton County kindergarten classes in Hamilton County for the 2018-2019 school year, according to officials.

The program’s key points, according to the council are:

• Every child entering kindergarten in Hamilton County, starting with the 2018-2019 school year will be the beneficiary of a 529 college savings account with a beginning balance of $100.

• Throughout the course of their K-12 education in Hamilton County, the account can grow through personal donations and earned incentives.

• Upon graduation from high school, the student has up to five years to use the funds for post-secondary education, whether it is at a college, university or trade school.

All accounts are to be set up with the State of Iowa, who will then manage the money for each individual student’s future.

New legislation was created in recent years which allows for a third party to own a 529 plan in the name of a child. A 529 plan, or a qualified tuition plan, allows for states, state agencies, or educational institutions to sponsor tax-advantaged savings plans, which are designed to encourage saving for future education costs. This was the extra push they needed to keep moving forward.

There was a lot of ground work that had to be laid for a program of this magnitude to take root, according to council members. Based on the success rates of Findley Elementary school, one of the most challenged school districts in Iowa that has seen projected high school graduation rates rise from just 60 percent to upwards of 90 percent in such a short period of time with a similar incentive plan, convinced the council that Hamilton County School Districts could aspire to the same rate of success. The “I Have a Dream Foundation,” proactive with dropout prevention, has been another source of aid in this venture. In working with Findley School District, the “I Have a Dream Foundation,” and the representative at the state treasurer’s office, the program was ready to be funded.

Rick Young, president of the council, spoke with Jeanne Wintermote, the Availa Bank Jewell Branch Manager and Personal Banker, to discuss the upcoming remodel of the Jewell location. This is when Jeff Scharfenkamp, President and CEO of Availa Bank, came into the equation.

“I want you to know we are going to make a difference in this community.” Scharfenkamp had said. Young took him up on his offer.

Last May, Young reached out to Scharfenkamp, saying he only needed ten minutes of his time to make his proposal, but instead 40 minutes.

“We talked about family — his family, my family, and how kids are different, and students are different, not every child will have a four-year-degree or an eight-year-degree, may just have a 2-year-degree, or tech school, or may just have some post high school education,” Young said. “We visited for quite awhile, and one question arose. He said we have a few banks around the state, what do I tell the other counties when they call me and say ‘hey you’re doing this over in Hamilton County, what about here?’ I told him to tell them to call Hamilton County and we will help them get their own program started.”

Availa Bank has agreed to sponsor each kindergartner at a level of $75. Availa Bank, based out of Carroll, started the Availa Kares program, making it the first program of its kind in the nation to cover an entire county.

“The premise of Availa Kares is an emotional thing,” said Scharfenkamp. “Not enough people care. People care about themselves. Young cares about community, he cares about kids. That struck a chord with me.”

Availa Bank, formerly known as Carroll County State Bank, has given out up to $2 million to worthy causes. This program struck Scharfenkamp as a worth while cause.

“Availa Bank is a community bank, focused on the communities we serve. We work with main street business, we work with farmers, we make profits for share holders that in turn will fund causes like this. Bless the council for doing this, writing a check is easy, but without the hard work of this group, writing the check wouldn’t have been enough. Proud and pleased to sponsor a cause such as this one. Couldn’t be more happier and hope it translates to more things,” said Scharfenkamp.