Lynx rough up Perry for 369 yards rushing in easy victory 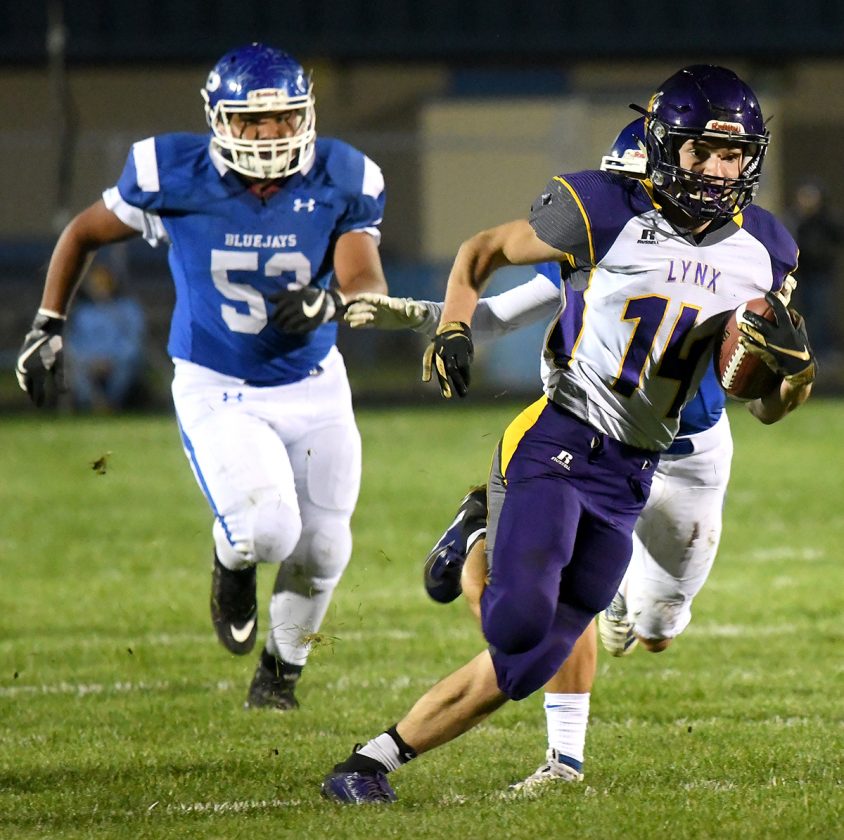 WCHS wingback Garrett Whitmore (14) breaks free on a 50-yard touchdown run during the first half against Perry on Friday in Perry. He rushed for 133 yards and three TDs in the Lynx 50-13 rout of the Blue Jays. DFJ photo/Troy Banning

PERRY — The yelling came from the Perry sideline first and the Blue Jays on the field echoed it almost every time Webster City broke the huddle during the first half at Dewey Field Friday night.

Garrett Whitmore, the Lynx senior wingback, knew their shouts were directed at him. It put a smile on his face too. Why? Because he knew Perry had no chance of slowing him down.

Whitmore touched the ball seven times in the game’s opening 24 minutes and sprinted through holes wide enough to drive through for 124 yards and three touchdowns during the Lynx 50-13 pasting of Perry on its homecoming. 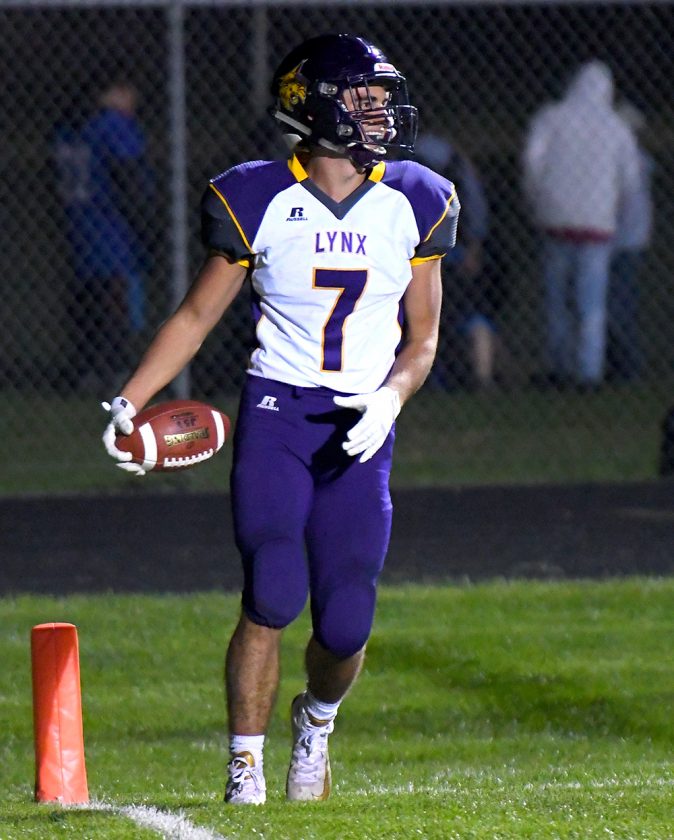 “It’s a testament to how well we’ve been running those plays all year and especially our line, how they can block it consistently every time,” Whitmore, who had just one carry after the break and finished with a game-high 133 yards, said.

Whitmore was a marked man in back-to-back losses to Algona and Carroll, as he averaged just 4.9 yards per tote. In the Lynx four wins, he’s averaged 9.6 yards per touch.

“Garrett is really explosive and you’ve got to decide if you’re going to try to stop him or try to stop (tailback Trey) Mathis because you can’t outnumber us on both sides,” WCHS head coach Bob Howard said. “(Friday night) they were loading up to try to stop (Mathis) off tackle on the strong side and Garrett was wide open.”

Even with the focus on him, Mathis still rambled for 80 yards on 16 carries and two more touchdowns, upping his Class 3A-leading total to 17 on the season. Spinback Gabe Humphrey chewed up 63 more yards on nine attempts, and speedy freshman CJ Hisler left an impression in the fourth quarter with 52 yards and a TD on just five rushes. 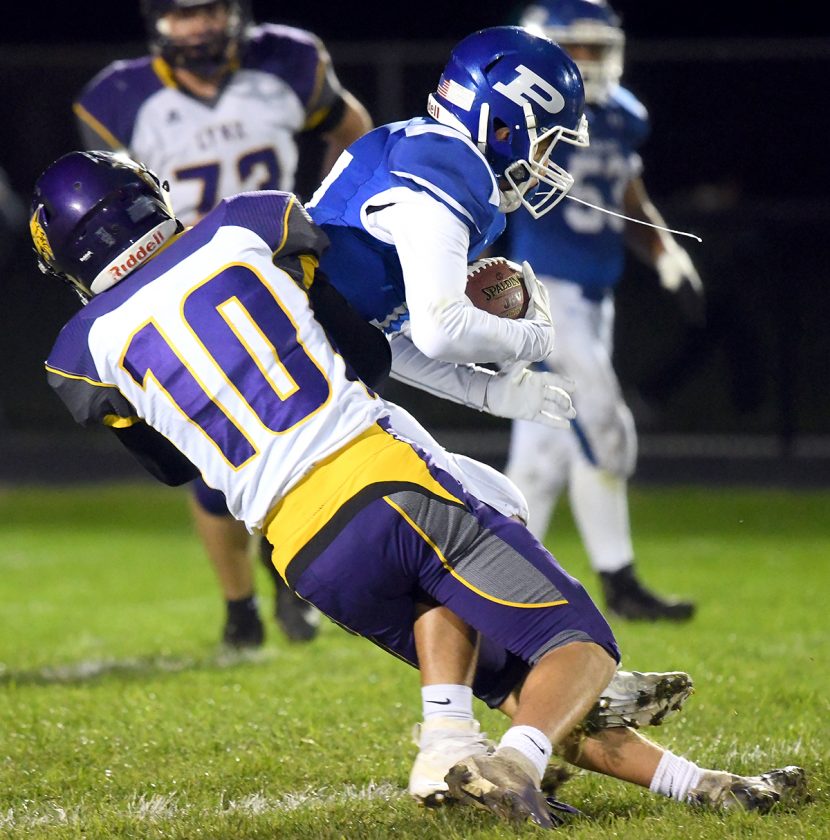 Spit flies out of the mouth of Perry wide receiver Kato Dougan as he’s hit in the open field by Webster City freshman Ty McKinney (10) on Friday. DFJ photo/Troy Banning

The Lynx led 35-0 at halftime. The entire second half was played under a running clock.

“This was definitely needed, especially after two straight losses,” Whitmore said. “Those were pretty tough on everybody, so this is certainly a morale booster.”

The beat down commenced shortly after the opening kickoff.

Mathis scored from 6 yards out on the Lynx opening possession and Whitmore followed it up with a 50-yard trek to the house without being touched to give WCHS a 13-0 lead after one quarter.

Another Mathis TD, this one from 4 yards, followed by back-to-back TD runs of 5 and 15 yards by Whitmore gave the Lynx the insurmountable halftime cushion. 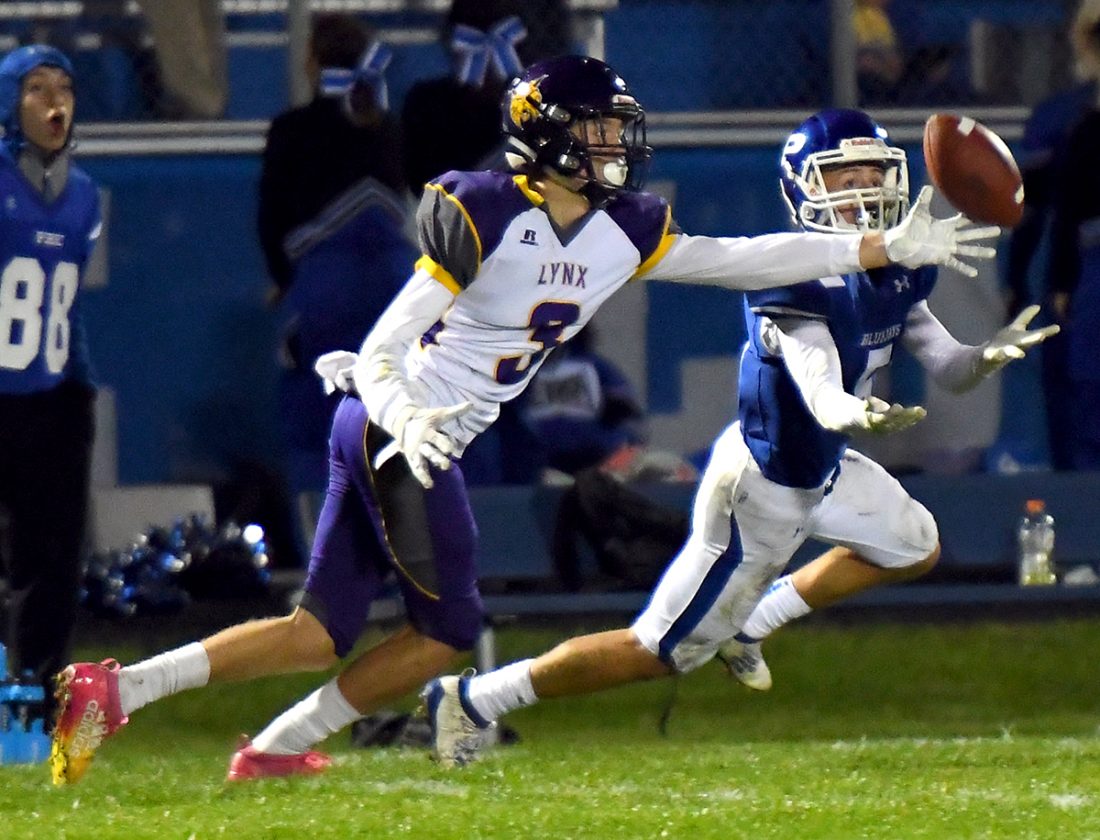 And it could have been so much worse. WCHS fumbled the ball away inside the Perry 5 twice in the first half and three times on the night. Two of the turnovers occurred at the 1.

“It should have been 28-0 in the first quarter and we could have done all that subbing earlier, but that happens,” Howard said.

As unstoppable as the Lynx offense was, the defense was even more dominant.

With the defensive line overwhelming the front five of Perry, the Blue Jays mustered only 38 first-half yards, 34 of them coming on a deflected pass late in the second quarter.

WCHS threw Perry (0-6, 0-2) backwards on nine plays in the opening half and freshman nose tackle Connor Hanson at times singlehandedly shut down the Blue Jays running game. He finished with 51⁄2 tackles, including 21⁄2 for loss. 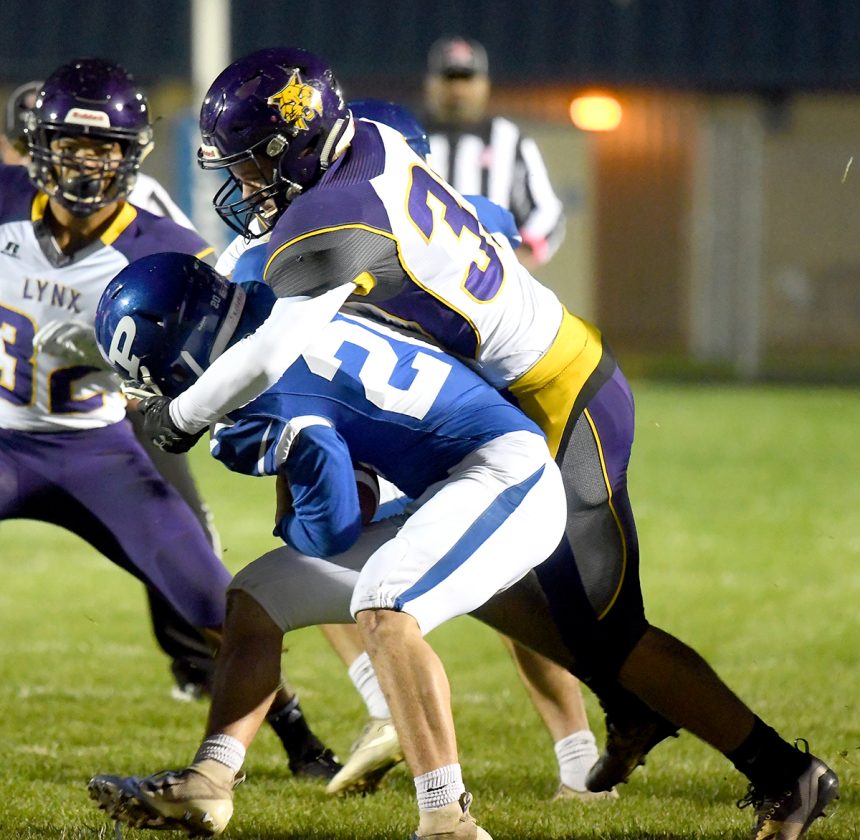 “The big thing at nose is to stay low and go 110 percent,” Hanson said. “The biggest part is you just go fast and that’s what I tried to do.”

“He’s tough,” Howard said of Hanson. “He’s quick and he’s done really well for a freshman, and that’s a tough place to play because you get doubled so much.”

Alex Ford and Nathan Ely had two tackles in the backfield each, as WCHS limited Perry to 24 total rushing yards. The Blue Jays hit several big passes late against the Lynx reserves to push their offensive output to 150 yards, but the WCHS starting unit allowed only 33 of them before they went to the bench for good midway through the third quarter.

Penalties only compounded Perry’s woes — 13 in all for 97 yards. Its opening possession of the second half was a microcosm — a block in the back penalty on the kickoff, followed by back-to-back false start flags that pushed the Blue Jays back inside their own 5. The next snap was low and went between the legs of quarterback Jacob Nelson. He picked the ball up and attempted to flee the end zone, but defensive end Jamin Stuhr was there to drop him for a safety.

“Our defensive line did what they needed to do,” Howard said. “They moved the line of scrimmage back and were pretty disciplined.”

Perry avoided the shutout with a pair of fourth-quarter TDs — a 3-yard run by Wilber Ramirez and a 17-yard throw from Jeremiah Baker to Ever Tobar with two seconds on the clock.

Wilber’s score was set up by a WCHS fumble at the goal line that Perry took 71 yards all the way to the Lynx 28.

WCHS defensive back Tyler Olson upped his 3A-leading interception total to eight in the first half when he stepped in front of a Nelson pass and returned it to the Perry 13. The junior has intercepted at least one pass in all six games this season.

Perry has now lost 15 consecutive games dating back to the start of the 2018 season.

WCHS is 6-0 all-time against the Blue Jays and has outscored them 252-54. All six meetings have come since Bob Howard took over in 2007.

The win was also a milestone for Howard, who moved into a tie for seventh place with Emmetsburg legend Duane Twait on the state’s all-time wins list with 339.

WCHS wingback Garrett Whitmore (14) breaks free on a 50-yard touchdown run during the first half against Perry on Friday in Perry. He rushed for 133 yards and three TDs in the Lynx 50-13 rout of the Blue Jays. DFJ photo/Troy Banning

Spit flies out of the mouth of Perry wide receiver Kato Dougan as he’s hit in the open field by Webster City freshman Ty McKinney (10) on Friday. DFJ photo/Troy Banning