No. 3 Algona survives Lynx on batted down 2-point pass 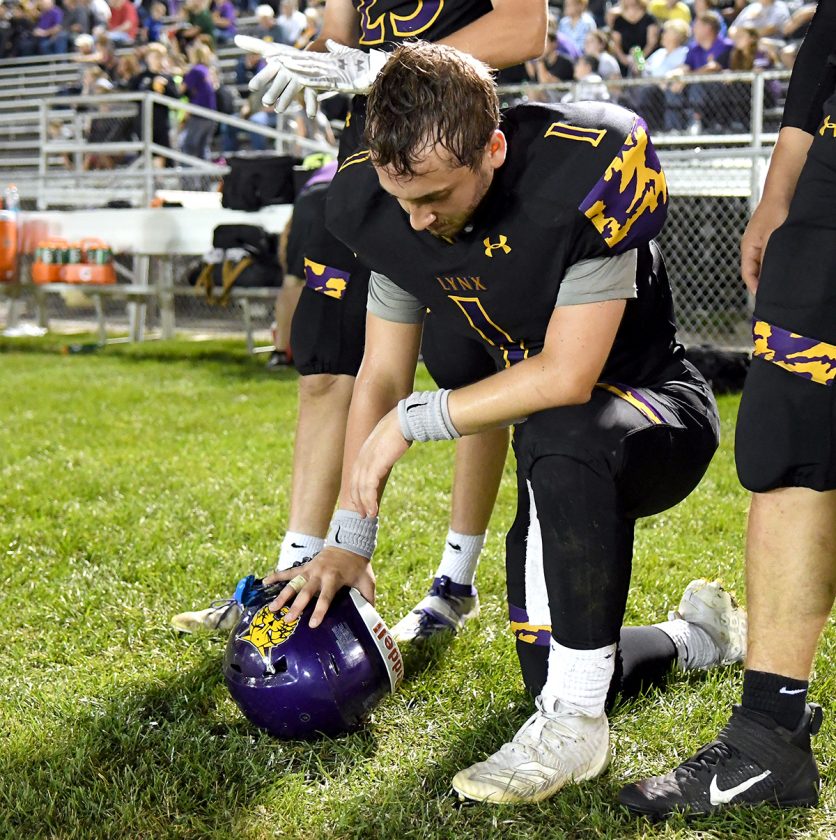 A dejected Gabe Humphrey, Webster City’s senior spinback, kneels on the sideline in the final moments of the Lynx 34-33 loss to third-ranked (Class 2A) Algona at Lynx Field Friday night. Humphrey passed for 109 yards and two touchdowns, and also rushed for 41 yards in the game. DFJ photo/Troy Banning

A dejected Gabe Humphrey, Webster City’s senior spinback, kneels on the sideline in the final moments of the Lynx 34-33 loss to third-ranked (Class 2A) Algona at Lynx Field Friday night. Humphrey passed for 109 yards and two touchdowns, and also rushed for 41 yards in the game. DFJ photo/Troy Banning

WEBSTER CITY — One play with the ball sitting three yards shy of the goal line to win the game — Bob Howard doesn’t just like those odds, he loves them much the same way he loves his dog and John Wayne.

That one play didn’t go his way Friday night and the Hall of Fame coach immediately knew he had a long, lonely night of personal second-guessing in front of him.

Playing for the win rather than overtime with 27 seconds remaining on the clock, Webster City went for two and came up short when spinback Gabe Humphrey’s pass was batted down in the end zone by Algona’s Jason Cecil. The ensuing onside kick squirted out of bounds and the third-ranked (Class 2A) Bulldogs survived the battle of the unbeatens, 34-33.

Rather than hand the ball to workhorse tailback Trey Mathis, Howard opted to call Humphrey’s number on a rollout to the right. But Algona wasn’t fooled and had wide receiver Tyler Olson blanketed in the end zone. Humphrey got the pass off and Olson skied for it, but Cecil got to it first. 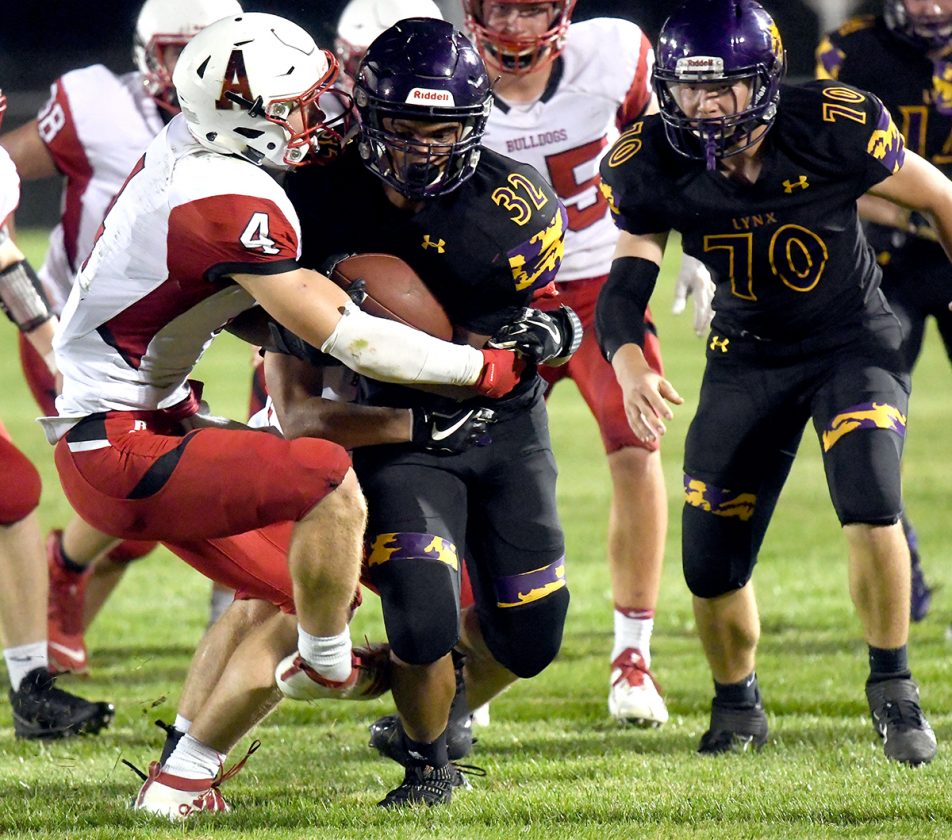 It was a slap-in-the-face ending to what could have been pandemonium on the WCHS (3-1) sideline. Trailing 34-27, the Lynx traveled 73 yards in just under four minutes and pulled within a point on a 1-yard plunge from Mathis, his third touchdown of the game. A 28-yard pass from Humphrey to Carter Neuroth on fourth-and-5 from the Algona 31 set up the score.

Mathis and Humphrey were the catalysts for a Lynx offense that went toe-to-toe with Algona. Mathis lumbered for 149 yards on 32 carries, and the junior only got stronger as the contest sprinted towards its conclusion. By the time the fourth quarter rolled around he was routinely dragging a gaggle of Bulldog defenders with him down the field.

“I just wanted to show my teammates that what they were doing to help wasn’t going to waste,” Mathis said. “I was trying my hardest every play.”

So was Humphrey, who showed that WCHS is far from one-dimensional. He accounted for 150 yards of offense — 8 of 13 passing for 109 yards and two TDs to Olson, as well as 41 ground yards.

Humphrey’s first scoring toss to Olson covered 21 yards and came on fourth-and-11 in the first quarter. The second connection came on third-and-goal from the 10. 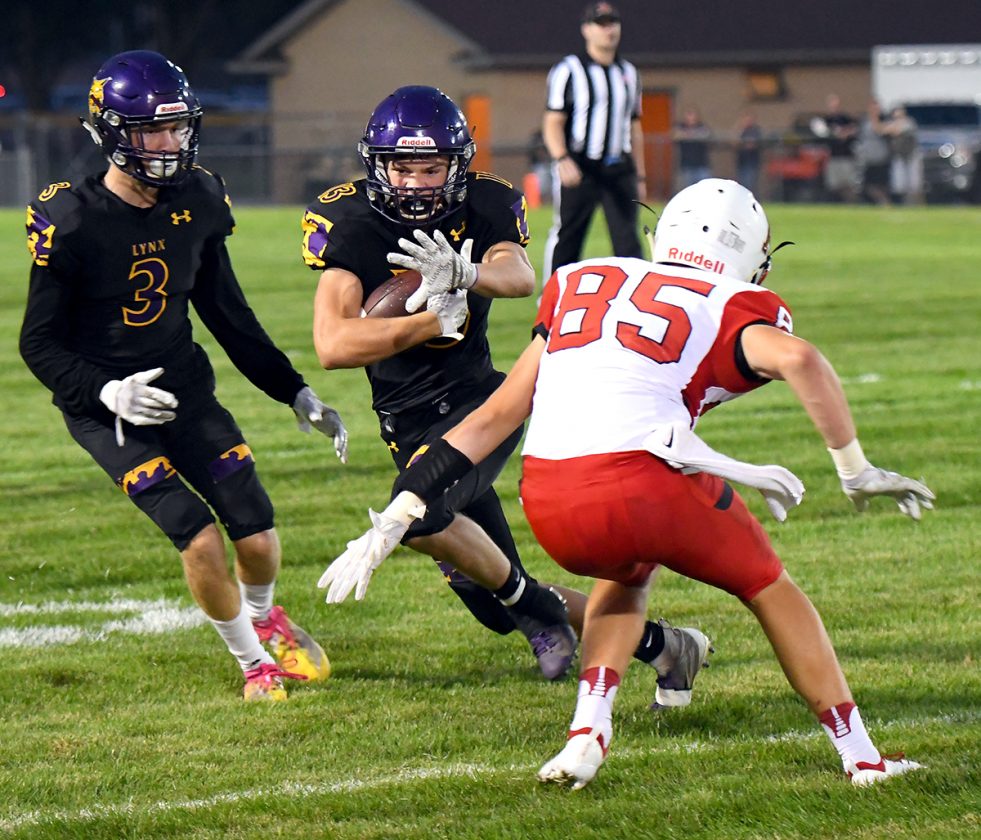 But Humphrey was left kneeling on the sideline staring at the turf as the final seconds ticked off the clock. Yeah, he played well, but in the moment it meant little.

“I was just disappointed that we didn’t finish the game because we’re good enough to beat them,” Humphrey said. “We just came up one play short.”

Algona was determined to limit the big-play capabilities of Lynx wingback Garrett Whitmore on the perimeter and it succeeded. Whitmore finished with just 50 yards on 14 carries.

“They were definitely sitting on Garrett the entire way,” Howard said.

Algona out-gained WCHS 375-349, with 295 of the yards coming from all-state wingback Wyatt Wegener, who has drawn interest from both Iowa and Iowa State, among others. Wegener churned out 217 yards rushing on just 16 carries. 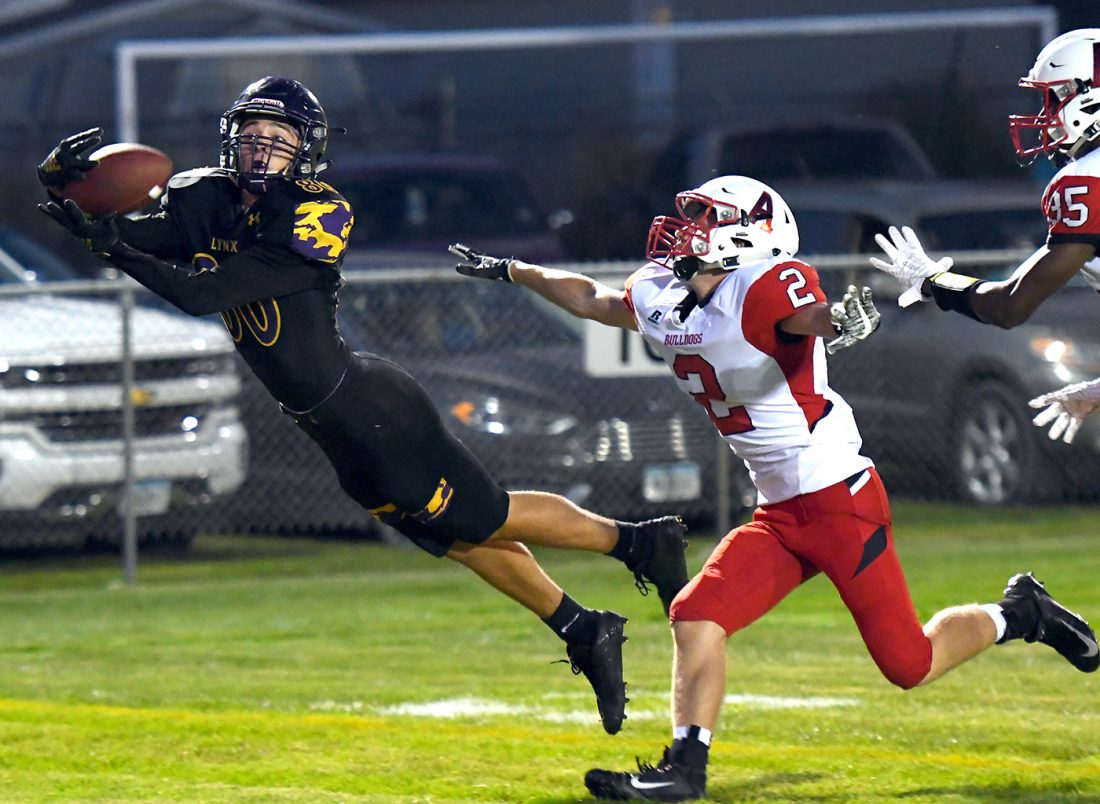 At times, Wegener looked very much like the video game that his numbers project. He scored four touchdowns — three rushing and one receiving — and averaged 44.5 yards per touch in the first half when the two teams played to a 20-all stalemate.

“Wegener is a really good football player and you can’t arm tackle him,” WCHS defensive end Jamin Stuhr, who had 51⁄2 tackles including two for loss, said. “It’s hard, but we’ve just all got to get better at (tackling).”

Wegener was Mr. Big Play in the opening half when he scored on a 78-yard reception from quarterback Josh Manske and an 80-yard spinning, cutting sprint that included an array of broken tackles.

Wegener added a 70-yard journey right up the gut early in the third quarter to give Algona 27-20 lead.

“There were four plays that hurt us and all four had the same common denominator, and he’s good,” Howard said of Wegener. 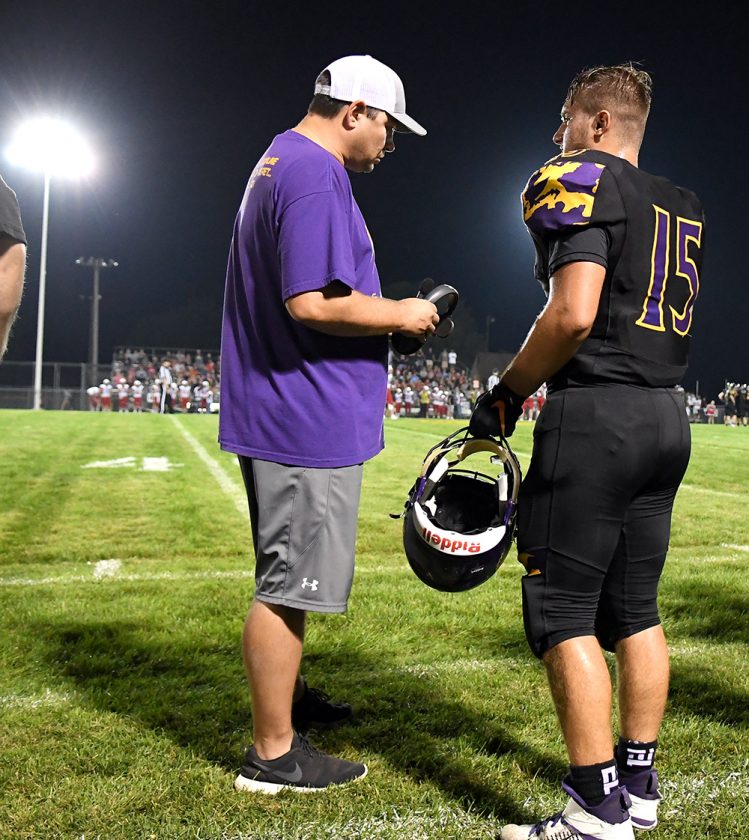 WCHS eventually drew even again at 27 on a Mathis 2-yard run with 11:24 remaining and that’s when Algona turned the offense over to Wegener.

Running out of the wildcat, Wegener tucked the ball and ran on 10 of the Bulldogs’ 15 plays that he capped with a 13-yard touchdown. He also drew a pass interference call on the 68-yard drive that chewed 6:59 off the clock. Algona’s longest drive prior to that was 2:49, and half of its 10 possessions in the game lasted less than one minute.

“The drive before we went three-and-out and so I told the coach to put me in at (quarterback) because it’s there,” Wegener said. “It worked out and I was just following my blocks up front. They do an amazing job.”

Howard knew what was coming, but that didn’t matter.

“They ran single wing against us,” he said. “They can call it wildcat or whatever they want to call it, but that’s single wing. They were running the same play Mathis runs. We call it 438 and I don’t know what they call it, but it was three lead blockers off tackle. We knew it was coming and we couldn’t stop it.”

Defensively, WCHS forced three turnovers — first-half interceptions by Olson, his sixth, as well as Mathis and Ty McKinney. Chase Rattenborg had a team-high 61⁄2 tackles, while Mathis and Connor Hanson registered four each..

The outcome wasn’t what the Lynx wanted, but with 3A District 2 play ready to begin, Howard feels like his team is moving in the right direction.

“Our No. 1 goal was to be better when we left the field than when we took the field and I think we were,” he said. “I think we improved as the game went on and I was very happy with how the kids played.”