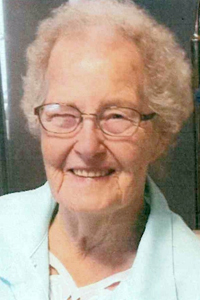 Funeral Service: 10:30 A.M. Wednesday, February 27, 2019 at the Jamison-Schmitz Funeral Home in Oelwein, Iowa with Rev. Margaret Yackel-Juleen officiating. Visitation: 3:00 to 7:00 P.M. Tuesday and for one hour before the service at the funeral home in Oelwein. Interment: Taylorsville Cemetery, Arlington, Iowa. Online obituary at www.jamisonschmitz funeralhome.com

Evelyn Loretta Peterman was born January 24, 1935 at Papa, Illinois the daughter of Ernest and Berdena (Godfey) Peterman. She graduated from Arlington High School in Arlington. Evelyn was united in marriage to George Herzman and they later divorced. On December 24, 1977, she was united in marriage to Clair Bentley at the Grace United Methodist Church in Oelwein. Evelyn was a nurse’s aide working at the Strawberry Point Lutheran Home, Oelwein Healthcare and Country Meadows in Webster City. She also was employed at the Executive Inn Motel and did home health care. She enjoyed cooking, spoiling animals and camping.

She was preceded in death by her parents; and a sister: Mable Conley.