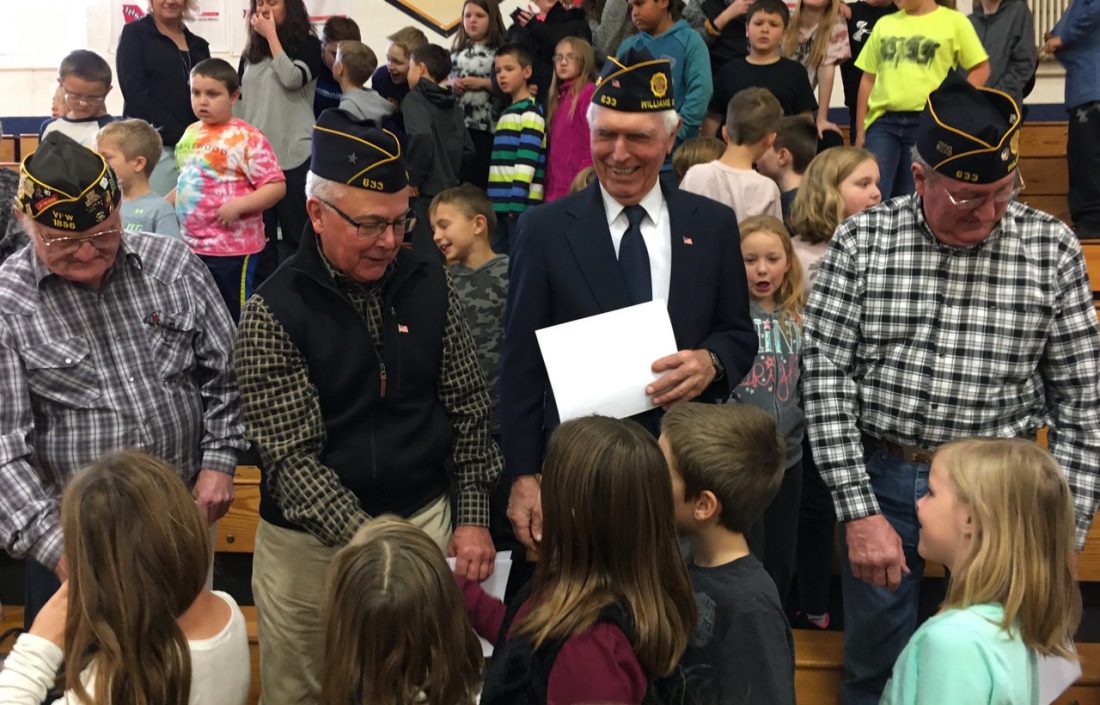 “Veterans Day is about saying thank you to those men and women who have sacrificed so much of themselves for the greater good of the United States,” declared Williams American Legion Post 633 Commander Derrick Greenfield at Northeast Hamilton Elementary School ceremony on Monday.

While Memorial Day is designed to honor soldiers killed in battle, Veterans Day honors all service personnel who have served, Greenfield told the assembly of students, staff and community members.

This year marks the 100th anniversary of what was first known as Armistice Day, he explained. It marked the 11th hour of the 11th month of the 11th day to commemorate the declaration of peace which ended World War I in 1918 – a war so horrific that is was called “The War to End All Wars”.

President Woodrow Wilson proclaimed that a national Armistice Day be held beginning on Nov. 11, 1919, explained Greenfield. In 1954, the name of Armistice Day was changed to Veterans Day as it would honor all veterans, past and present.

The NEH assembly opened with the American Legion Color Guard posting the Colors, then elementary Principal Jessica Hector lead the recitation of the Pledge of Allegiance.

Music teacher Elizabeth Schwanke led students and guests in singing the “Star Spangled Banner”, “America the Beautiful” and “My Country Tis of Thee”.

Second grade students Harper, Delainey, Conor and Ellie presented a skit honoring the five branches of the military – the Marines, the Navy, the Army, the Air Force and the Coast Guard.

Greenfield closed the program reminding students that at every hour worldwide, veterans are on duty.

“Just remember that every minute of everyday, there is a veteran somewhere fighting for freedom and protecting the American people,” Greenfield said. “We do it for all of you. We do it because we care – we care about you and our country”.

After the assembly, the veterans gathered at 11 a.m. and bowed their heads for a moment of silence to observe actual time of the World War I armistice.

Following the assembly, veterans were invited to lunch with the students.