Kamrar brothers served their country during World War I 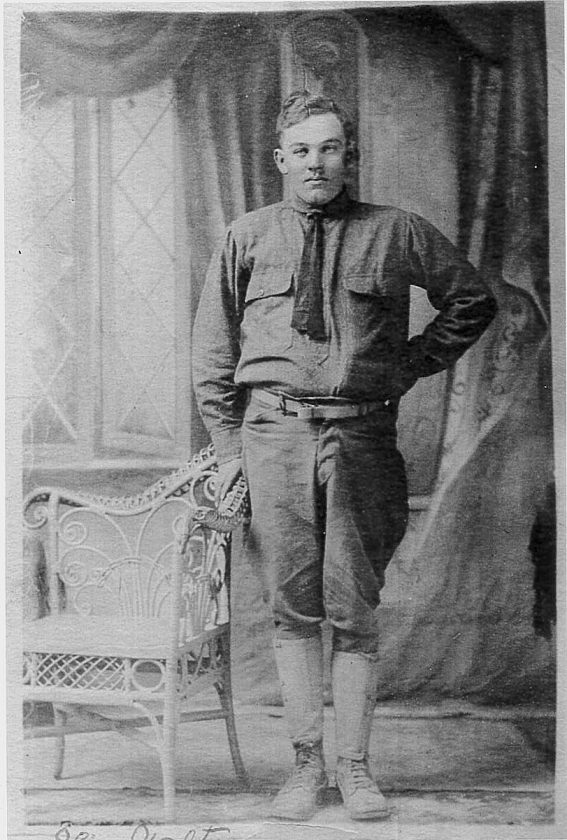 Hio Walterman stands for a photo in his World War I military uniform. He and his brother, Eppo, both served in Europe during the war. Hio Walterman was a victim of a poison gas attack. He died at the age of 22.

Just over 100 years ago, World War I came to a conclusion with an extremely large number of casualties — including those wounded and dead. Total World War I casualties are estimated at over 36 million.

For the United States, the estimation is 321,000. A reason for the large number of casualties is that World War I was the first industrialized war, in that, new forms of weaponry such as improved machine gunnery, airplanes, tanks and poisonous gases were used with old war tactics that were completely outdated.

Another outcome of World War I was the organization of the American Legion in 1919 with a caucus being held by members of the American Expeditionary Force in Paris, France. World War I was called the Great War, the war to end all wars, or a war to save the world for democracy. Many poems and songs were written as a result of the War being fought.

Sander Walterman came to the United States in 1901 along with his wife, Tena, sons Eppo and Hio, and a daughter Johanna, arriving from Bellingwolde, Holland. Bellingwolde is located about a mile west of the German border with Holland. The Walterman family came almost directly to Kamrar, Iowa.

The year 1916 proved to be quite a decisive one affecting the Walterman family. In the early morning of March 9, 1916, Francisco “Pancho” Villa crossed the U.S.-Mexican border with several hundred Mexican guerrillas under his command and attacked the border town of Columbus, New Mexico. Seventeen Americans were killed in the raid and the center part of the town was burned. President Woodrow Wilson ordered the U.S. Army into Mexico under the command of U.S. Brigadier General John J. “Black Jack” Pershing to capture the rebel leader, dead or alive.

Earlier in January 1916, Villa executed 16 U.S. citizens at Santa Isabel in northern Mexico to protest Wilson’s recognition of Venustiano Carranza as the president of Mexico.

By 1916, the Walterman family living in the Kamrar community, had settled in, with Sander Walterman working for the Carson Elevator as manager, Eppo Walterman was active in farming, and Hio worked for H.G. Klaver, northeast of Kamrar. In the spring of that year, after considerable discernment, both Eppo and Hio Walterman came to Webster City and enlisted in Company C, and mustered in at Camp Dodge in Des Moines as privates on June 28, 1916. They traveled with Company C, going with that Iowa National Guard unit to Texas where they served through the period of the Mexican war scare.

Under orders, Brigadier General Pershing was to launch an expedition from New Mexico into Mexico and capture Villa and break up the rebel force. It was the first U.S. military operation to employ mechanized vehicles, including automobiles and airplanes. After 11 months, Pershing was not able to capture Villa and with growing resentment over U.S. intrusion into Mexican territory, a conflict arose between U.S. troops and Mexican government forces at a skirmish near Carrizal, Mexico. This event left 12 Americans dead and more than 30 Mexicans killed and a number wounded. If not for the critical situation in Europe, war might have been declared.

In January 1917, having failed in their mission to capture Villa and under pressure from the Mexican government, the Americans were ordered home. Hio and Eppo Walterman were mustered out of the U.S. service on March 23, 1917 at Fort Des Moines. The brothers remained with the Company upon its return to Webster City. On April 7, 1917, Eppo Walterman reenlisted and Hio Walterman reenlisted June 17, 1917.

They were assigned to Company C, Second Regiment,168th Division (Rainbow Division) waiting for further orders. The United States officially declared war on Germany Dec. 7, 1917 even though the Senate had passed a war resolution on April 4 and the House of Representatives on April 6. Came time to head to Des Moines, the Walterman brothers left from Webster City(Northwestern Depot) traveling thru Kamrar, Jewell and on to Des Moines. On August 19, 1917, Hio reported to Camp Logan at the State Fair Grounds in Des Moines and then went onto Camp Mills located on Long Island, New York for further training.

Training included weapon instruction, trench construction and instruction on going “over the top.” The brothers left for France from New York City on Nov. 14, 1917 by troop transport, first traveling to Halifax, Nova Scotia to join other troop transports. Those troops made up a convoy to cross the dangerous north Atlantic, then onto Great Britain and finally landing at LaHavre, France.

In December, the brothers were assigned to a camp in northern France for further training. Two months later, the Rainbow Division was placed into action. Hio Walterman went into the trenches northeast of Badonviller, France Feb. 23, 1918, close to the front line, in the Alasce-Lorraine Sector.

A victim of attack

On May 27 and 28, the German Army made extreme gas attacks and it was in this attack that Hio was gassed. Even though there were several forms of gas available, most likely the form used was mustard gas, causing severe burns and lung complications. One can only imagine the horror and pain beginning that moment. Soldiers were taught the use of gas masks, which contained a face mask with a device to pinch the nose closed. A flexible hose extended from the face mask to a container that filtered the air. A soldier had only seconds to placing the mask to the face and carefully sealing the mask as tight as possible. Shaving was an essential daily task in order for the mask to seal. If the soldier delayed at all, the soldier might vomit in the mask and also suffer the consequences of any delay. Hio Walterman was sent to the Base Hospital #168 near Baccarat, France passing away on June 3, 1918. After an illness of a few days, pneumonia set in and Hio died at the age of 22 years, two months and 14 days. He and fellow soldiers were buried near Baccarat, France.

Little is known concerning the activities of Eppo and Hio Walterman as all mail was screened. Previous to Hio and Eppo’s assignment to the Lorraine Sector, Company C received considerable action in the Catigny, France area. The Walterman family did not know of their son’s death until a telegram was received informing the family. They had not received word of his illness and so the telegram came as quite a surprise. As reported in a local newspaper, “The Walterman family is well and widely known in the Kamrar community. The parents are extremely patriotic and the father has been heard to remark several times that he was proud and glad that he had two sons at the front in the thick of the fighting.”

Eppo was not in the area of the gas attack, , but was wounded in the left leg from a gunshot wound and convalesced at Base Hospital # 35. Eppo returned after the War to Camp Dodge in Des Moines, and mustered out Feb. 15, 1919. He passed away May 23, 1970, in Webster City.. Also, using a map search, one can bring up the wooded area northeast of Badonviller, France where this action took place. Also, many photos can be found of gas warfare during World War I on the internet.

On Sunday, June 16, 1918, an open air service was held on the school grounds in Kamrar. The grounds were lighted. Several ministers spoke, a large mixed chorus sang and the platform was decorated with a large American flag and a service flag with one gold star upon it in memory of Hio Walterman.

Following World War I, as permanent American cemeteries were being planned in Europe, the family chose to have Hio’s remains returned to Kamrar. On July 30, 1921, a funeral was held in Kamrar, and from there the body was taken to the Presbyterian Church Cemetery east of Kamrar for interment. Reported as one of the largest crowds ever reported in Kamrar, the funeral procession extended some three miles. Many Legionnaires from Webster City and the surrounding area attending the services to honor their fallen comrade. As reported, “Hio Walterman has made the supreme sacrifice for the country of his adoption. He has faced death in the trenches and has fought well in the greatest war of all times, doing his bit that America might continue to hold up her head among the nations of the earth.”

On June 8, 1918 from some where in France, Eppo Walterman wrote home saying: “How I long to be with you at this moment … But do not worry and grieve too much … for he died for a good cause. He died in the service of his country to help the world win in a fight for democracy …We were always side by side in the trenches. We stood guard on the same post and were in the same squad. I was his corporal, but now he is gone and I am alone and I certainly miss him and grieve for him every day … I am still in the best of health and maybe God will let me come back to you some day. He knows what is best for us…..Tell them (sisters) to write often as it is quite lonesome now …Your son, Eppo.”

They shall grow not old, as we that are left grow old:

Age shall not weary them, nor the years condemn.

At the going down of the sun and in the morning

We will remember them.

The author offers two recommendations: A Rainbow Division Lieutenant in France: The Diary of John H. Taber and the dvd, “They Shall Not Grow Old,” color enhanced video of documentary film about fighting in the trenches of World War I. Both primary sources are extremely well done.