Former DNR?head is first Democrat to declare bid for 2018 race 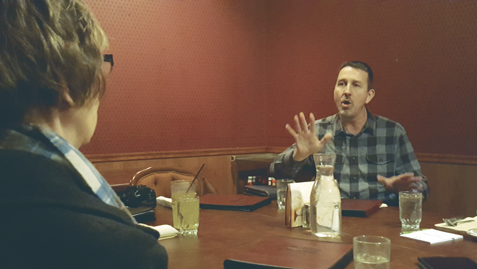 Rich Leopold, who last week announced his bid for governor, stopped in Webster City Wednesday morning as part of his “Let’s Go Outside” meet and greet tour across rural Iowa. He met with several local residents at the Second St. Emporium.

The Democrat said he announced his intentions to run for the office in a somewhat unusual manner — via a Facebook Live video.

“Typically, when you run for governor, you stand on the steps of the Capital surrounded by people in suits and TV cameras,” he said. “But we went to Huxley, Iowa, where I raised my family. We were in the community room there and we did this Facebook Live with just my wife sitting next to me.”

“People are hungry for change,” he said.

He said the theme for his tour across Iowa reflects not only his background and work in natural resources, but also his position as an outsider to the current political structure.

“We’ve been talking for this for a while. I’m a scientist by trade and I’ve never run for political office,” he said. Leopold is the former director of the Iowa Department of Natural Resources.

The candidate said the recent election made it clear that rural Iowans were ready to be heard.

“There was a lot of focus on the big cities but look what happened — 92 counties in Iowa spoke up very loudly. They demanded to be listened to,” he said.

Leopold said he is concerned with many issues facing rural Iowa, such as water quality, renewable energy and agricultural policy.

“We know what to do with water quality issues. We’ve known for 20 years. We just can seem to find the political wherewithal on either side of the aisle,” he said. “I’ve been very frustrated knowing the science was there to solve these problems, but we can’t get past the political cycle.

“It’s a problem that requires longterm financial commitment,” he said.

He said he’s also concerned with the state of mental health care in the state.

“I talked with a deputy sheriff who said when they get a mental health case, there are two choices — bring them to an emergency room where they can hold them for 24 hours or they can travel 120 miles where there might be a bed for them,” he said, adding that there are options that could better serve Iowans.

While the economic recovery has become a reality in many urban parts of the country, he said that rural people were among those left behind.

“How do we get real time, real money revitalizations in our smaller towns and rural communities?” he said. “I don’t see any attention being made for that. In fact, it’s just the opposite. Hospitals continue to close, schools continue to consolidate. Those are what makes the nucleus of these towns.”

He said he’s found that young people actually want to live in rural areas, provided there are good-paying jobs available.

“And a lot of the jobs we have now don’t have to be in Des Moines or urban centers. Information technology jobs and others can actually be located in rural communities,” he said.

Leopold he was deeply concerned with how the state government functioned.

“Everything seems to be tied to political cycles and not about getting things done,” he said. “I am sick and tired of divisive partisan politics and antagonistic rhetoric. Whenever a problem arises, all they do is lob grenades at each other and nobody gets anything done.”

The candidate said the rebuilding of the Democrat party, both in Iowa and nationally, will have to come from the outside.

“If you can find people that have executive experience, that know how to plan and get things done, but who are not part of the system, that’s where we need to go,” he said.